Battle of the prides

Sitting only meters from six lions and watching them tear shreds off a giant buffalo is not your average afternoon, by anyone’s standards. But this is exactly what we did during one afternoon game drive after stumbling on two prides of lions enjoying their recent kill.

There’s something strangely unsettling about watching lions devouring their prey. Perhaps it was the fact that we were sitting in an open top safari Land Rover and had nothing but a few blades of grass and a dusty patch of dry earth between us. Or maybe it was the flash of white enamel that we could see behind the blood stained fur around their powerful jaws. Or it could well have been the low guttural sounds that came from deep within their bellies and reverberated around the bush in the late afternoon silence. Whatever it was, I felt my body alive with the thrill of seeing this rare sight and had the goosebumps to prove it.

The weirdest part of this whole spectacle was that for the better part of the hour or so that we sat there and watched them, they completely and utterly ignored us. It was as if we didn’t exist. It was surreal. We had managed to cause a brief flicker of interest upon arrival, but they quickly forgot about us and went about their lion business. Don’t get me wrong – I’m not complaining! To sit and watch them feeding without drawing attention to ourselves enabled us to fully experience the complex dynamics between the two prides. For one thing, the prides were made up of different male/female combinations. One pride had two lionesses and a juvenile male, and the other pride had one lioness and two juvenile males. This, combined with the different ages of the lions created a hierarchy between the two prides. What does all this mean, I hear you ask? Well, interesting dinner conversation, that’s for sure!

When we arrived, the dominant pride was having first feed, gnawing on the exposed bones and flesh of the buffalo (apologies in advance to any vegetarians). Their huge open jaws exposing a mouth full of razor sharp teeth that cut through the skin and muscle with ease. And we could see that they’d been at it for some time. One of the older juvenile male lions had had more than his fair share and lay in a meat-induced coma nearby, completely passed out. His giant paws lay stretched out in front of him and his eyes were closed in what I can only assume was some kind of buffalo bliss.

Meanwhile, the other pride was starting to get impatient. They had been pacing up and down nearby and were slowly edging closer to the lions eating. It was clear they wanted in. Suddenly, the whole atmosphere shifted and tension rose in the air, sending a shiver down my spine. Two of the juvenile lions, both from opposite prides, started slowly circling the buffalo and growling at one another, their faces low to the ground and eyes locked on each other. Immediately, all 8 of us volunteers stopped taking photos and lowered our cameras, frozen with a mixture of anticipation and fear.

None of us could have prepared for what we saw next. As if jolted by a bolt of electricity, both lions swiped a paw at each other and stepped back on their hind legs, roaring in anger. “Oh my god, shit, what are we going to do?” I heard someone squeak next to me. Without taking her eyes off the scene unfolding in front of us, our fearless guide Letishia whispered loudly enough for us all to hear. “Guys, stay calm. We’ll be fine. Keep all arms in the vehicle and your movements to a minimum.” Rest assured this was one command we wouldn’t have trouble following.

In the fading light and dust, all we could see were flashes of their sand coloured manes (still spiky from youth) and tails whipping against the red earth as they lunged towards each other. The other four lions started growling in agitation, clearly ready to join the fight at a moments notice. It was as if we were witnessing a nasty schoolyard brawl, only there was no teacher on lunchtime duty. Armed with nothing but a camera and a tripod, it would have been a very quick fight indeed. We sat glued to our seats and waited.

Luckily for us, it dissipated quickly and the lions shook their dusty heads as they sauntered off in opposite directions, egos bruised. However, just when we thought it was okay to exhale, one of the lionesses snapped her head up and looked over at us intently, as if noticing us for the first time. Then the unthinkable happened. She slowly padded over to the car and around the bonnet until she stood just centimeters in front of me, her yellow eyes boring into mine. She was so close that I could see the flecks of black and gold in her irises and the smudge of fresh blood on the white fur around her mouth. I instinctively shifted away from her in my seat and averted my eyes so she wouldn’t feel threatened (at least that was my intention). I was sure I was about to launch into an out of body experience, brought on by pure fear and adrenaline, when she suddenly blinked, turned around and then promptly disappeared into the scrub. I slowly turned to the others and let out a low whistle, ‘Whoooa, that was close!’ We’d all felt it and it showed on our relieved faces.

Its funny how in the heat of the moment, your animal instincts kick in. All of a sudden you use your 6th sense to guide you, trusting your intuition above all else. Luckily, it’s usually always right.

It wouldn’t have been a fair match anyway. 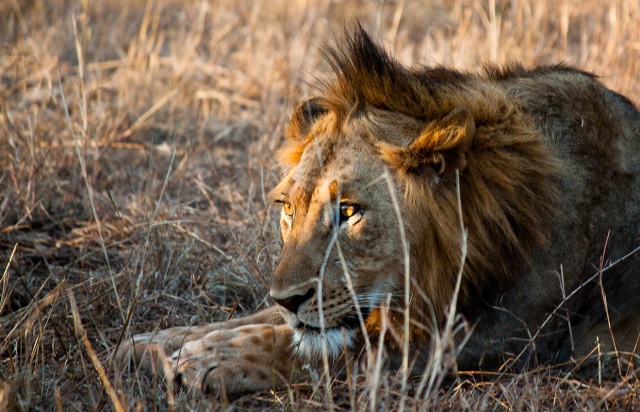 11 Responses to Battle of the prides